Raised for most of his childhood in Perryville and Jackson, Missouri, Staff Sergeant Jedidiah “Jay” Vermillion, USMC always thought he would become a Marine. His grandfather was a Marine, fighting in the epic battle on Iwo Jima during World War II. His dad was also a Marine, fighting through the jungles of Vietnam. There was, however, one hurdle to his goal of following in the footsteps of his personal heroes – his father telling him that he could do anything in this life….except become a Marine. So, Jay continued his teenage life, including as a star linebacker on the high school football team (earning a scholarship to Frostburg State University in Maryland), putting any thoughts of becoming a Marine out of his current plans, but never out of sight.

In August, 1999, SSGT Vermillion could not ignore his calling as a Marine any longer. He joined the Marine Corps because his father and grandfather were his heroes and he wanted to be just like them—Marines through and through who always conducted themselves as Marines. His first deployment came not long after the attacks of 9/11. On a patrol in Al Fallujah, Iraq in 2005, SSGT Vermillion was hit by a “triple stack IED,” – -three 105mm artillery shells. Later in that tour of duty, SSGT Vermillion was hit again by another IED. At the early stages in the long war on terror, traumatic brain injuries were not given the attention they deserved. At the time, it was considered normal to have severe headaches and other side effects of an explosion. If the Marine could walk, they might be allowed to rest for a week, but then they were put back into the fight because all available warriors were needed in those days, and continue to bring the fight to the enemy is exactly what SSGT Vermillion did. In 2010, SSGT Vermillion was the Platoon Sergeant in charge of his detachment during a second combat tour, this time in Afghanistan. During a vehicle mounted patrol on July 13, 2010, in Marjah, Afghanistan, SSGT’s Vermillion’s vehicle was hit with an improvised explosive device (IED) comprised of 100 pounds of homemade explosives. He was thrown head first into the back of his vehicle and lost consciousness. His vehicle was so damaged, and SSGT Vermillion in such a bad condition, that those who initially came to his rescue assumed that he had been killed. Showing the bravery and determination that drives him to this day, Jay fought for his life and survived this incredible blast.

Jay is supported in his recovery by a beautiful family. Jay also gains strength from his loving children, Jedidiah, Cole, and Lyla, who all have learned so much about honor, bravery, strength, and perseverance, from their dad.

Jay, Jedidiah, Cole, and Lyla, we could not be more proud that you have become part of the JCS family and we are honored to welcome SSGT Vermillion, USMC as our 10th JCS Hero!

Keep up with Jay 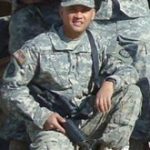 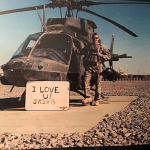