Jeremy Miller enlisted in the U.S. Army in 1994, entering the service after high school graduation. He joined the infantry and was awarded the Expert Infantry Badge, completed Air Assault School and the 25th Infantry Division Pre-Ranger course. He also completed Primary Leadership Development Courses and completed the 101st Airborne Division Pre-Ranger School and Airborne School at Fort Benning and served on deployment in Kosovo. In 2002, as a Platoon Sargent, Jeremy was assigned as a driver for Division Commander Major General David Petraeus.

Jeremy was then deployed with the 101st Airborne Division in 2003 during Operation Iraqi Freedom. It was during this deployment when Jeremy sustained injuries to both shoulders because of his proximity to large explosions. These injuries however did not prevent him from completing his duties during this deployment. After his return, he attended Warrant Officer Candidate School at Fort Rucker and was promoted to Warrant Officer. After shoulder surgeries, he began Army Aviation Flight School.

Upon graduation, Jeremy was assigned to fly Kiowa Warrior OH-58d (R) and was promoted to Chief Warrant Officer shortly thereafter. In 2010, Jeremy was deployed to Operation Enduring Freedom completing his second deployment. During this deployment, while supporting friendly ground forces, he was involved in a helicopter crash resulting in the need for reconstructive surgery to areas of his face. He was hospitalized for 45 days at the military hospital on Kandahar Forward Operating Base.

After recovering, he was promoted to CW3. Jeremy returned to Fort Campbell and completed the Advanced Warrant Officer Training Course and the Kiowa Warrior instructor Pilot Course at Fort Rucker. In 2013, Jeremy was deployed for the third time.

At the end of his deployment, his injuries and symptoms from previous injuries became so severe, causing vision issues he was unable to fly further and he was grounded.

In 2017, Jeremy retired from the Army after 22 years and 8 months of faithful service to our country.

Jeremy’s wife Cindy is also a combat veteran of Operation Iraqi Freedom and together, they have six children. 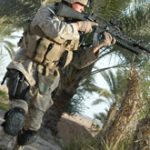 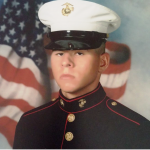