Nate volunteered to deploy again with Bravo battery in his battalion that was scheduled to deploy in January 2010. Bravo battery’s mission was to provide artillery support for Coalition Forces in Kunar Province, Afghanistan.  Nate’s platoon was assigned to FOB Blessing, Afghanistan.  Nate was his section’s one of two ammo team chiefs and was also tasked with providing tower guard for 12 hours a day.

Nate’s life changed on May 4, 2010.  Nate was four months into his second deployment when his section was called out to the howitzer for an upcoming fire-mission.  As they moved their gun, an enemy mortar round impacted near their own howitzer.  Nate and three others were severely wounded and had to be medevaced stateside.  However, once Nate got to the nearest surgical hospital, he blacked out and woke up five days later at Walter Reed Army Medical Center in Washington D.C.  That’s when he noticed that his left leg was amputated above the knee.  Nate underwent about 11 months of rehab at Walter Reed. He was able to go home March 2011, on PSC home leave. In January 2012, Nate medically retired from the Army. In 2018, Nate received his master’s degree in Social Work from Saint Louis University. 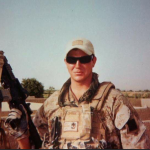