SFC Henry Escobedo served 12 years in the United States Army as an indirect-fire
infantryman before being medically discharged in 2014. Born in Guatemala, Henry and his
family immigrated to the United States of America when Henry was nine years old.

When Henry was nineteen, he joined the United States Army. In 2003, during Operation Iraqi
Freedom, Henry had his first deployment as an Infantryman with the 2 nd  Battalion,
37 th  Armor, 1 st  Armor Division to Baghdad/Al Kufa-Najaf, Iraq. SFC Escobedo sustained his
first concussion/TBI from incoming enemy fire. After his first tour, Henry decided to leave
the Army. However, not long after his retirement, Henry decided to join with the 75th
Training Command as a reservist on Title 10 Active orders. Henry’s second deployment
took place in 2010 to Taji, Iraq to help train the Iraqi Army.

When he returned home from his 2003 deployment, Henry began to experience headaches
and dry eyes. It became evident to Henry that his condition was becoming much worse
during his 2010 deployment. By the end of 2011, his vision deteriorated almost completely.
Henry is now legally blind with minimal light perception. Henry was eventually diagnosed
with Leber’s Optic Neuropathy which was the result of multiple concussions during his
active service.
Henry met his wife, Mayra, while serving together in the United States Army. She has been
his strength. Henry stated, “Mayra has stuck with me through thick and thin, she is my
light.” Henry and Mayra have a son, Jairo and a daughter, Jade. Now that Henry is
medically retired, Mayra, Jairo and Jade are his main priorities. Henry is scheduled to
graduate with his master’s degree in Counseling in February 2021. Henry hopes to help
those experiencing PTSD and anyone that needs counseling for mental health issues.

The Joshua Chamberlain Society of Houston is honored and pleased to recognize SFC
Henry Escobedo as our first/inaugural hero and humbled to have him joining the JCS family.
We hope that we can give back to SFC Escobedo a portion of all he and his family have
given to the United States of America. 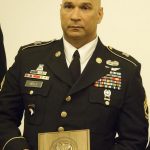 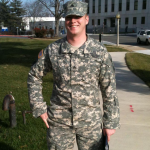