Cpl. Timothy Maguire enlisted in the United States Marine Corps in August of 2003 with his two best friends after graduating from Festus High School in 2002. After bootcamp, Cpl. Maguire went to Camp Pendleton for Marine Combat Training and then continued training from January to March 2004 in the Military Occupational Specialty of artillery at Marine Corps Base, Twenty-Nine Palms, California.

Cpl. Maguire was then stationed at Camp Lejeune, North Carolina before deploying to Iraq in March 2005 with 3/10 Kilo Battery. On May 15, 2005, Cpl. Maguire was driving on a mounted patrol with four other Marines and a Navy Corpsman when their Humvee hit an IED and exploded to the left. Five of the six injured were transported out of Iraq due to the severity of the injuries. This blast left Cpl. Maguire without his right arm and a severe traumatic brain injury that led to a Craniotomy.

From May of 2005 to January of 2006, Cpl. Maguire underwent physical and occupational therapy at Walter Reed Medical Hospital. Cpl. Maguire’s parents and siblings were at his side as he continued his recovery. Cpl. Maguire completed his therapy and returned to Camp Lejeune with the Wounded Warrior Battalion. Cpl. Maguire was medically discharged and retired honorably from the Marine Corps in August of 2006. Cpl. Maguire was awarded the Purple Heart for his service.

Cpl. Maguire received his Associates Degree in Web and Graphic Design in the spring of 2013 while working full-time. Currently living in St. Charles, Cpl. Maguire and his wife, Rachel, have three children, Addison, Mason, and Charlotte. 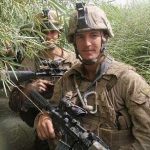