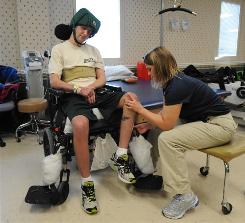 TAMPA — Army Ranger Cory Remsburg was thrown like a rag doll into an Afghanistan canal Oct. 1 by the blast from a 500-pound roadside bomb, the right side of his head caved in by shrapnel.

After a medical evacuation and six surgeries at military hospitals in Afghanistan, Germany and Bethesda, Md., Remsburg arrived at the James A. Haley Veterans Hospital here in November in a vegetative state.

Doctors, therapists, family and friends rallied to help with Remsburg’s therapy. They massaged joints, stretched limbs and exercised muscles. They stimulated him with drugs, aromas and episodes of the TV comedy Scrubs. They questioned, commanded and cajoled — anything to jump-start his brain.

Progress came by inches, his family rejoicing over every success: “Those baby blues are looking very good,” they wrote in an online journal about his open and alert eyes.

More than three months after being pulled from the water of the canal, Remsburg, 27, had emerged into consciousness. On Jan. 13, doctors said he was officially awake. Remsburg’s reawakening is one of several unexpected developments being documented at four special Department of Veterans Affairs “emerging consciousness” programs here and across the nation. Brain-damaged patients reduced to vegetative states by illness, accidents or wounds are waking up.

This is not the stuff of Hollywood movies, where a stricken soldier suddenly sits upright in bed and begins chatting with his family. For Remsburg and dozens like him, the emergence into consciousness takes place over painful, frustrating weeks and months.

Yet the VA reports nearly a 70% success rate at seeing once-comatose patients return to consciousness at the centers — here and in Minneapolis, Richmond, Va., and Palo Alto, Calif.

Of 97 troops or veterans admitted to these centers between January 2007, when the Emerging Consciousness program became fully operational, and the end of 2009, 67 have awakened, says David Cifu, VA national director, Physical Medicine and Rehabilitation. Two of those were soldiers brought in from overseas battlefields — Remsburg and Sgt. Tony Senecal.

For decades, doctors have considered patients in a coma or a vegetative state to be among the most confounding medical challenges because science provided no proven treatments for helping them regain consciousness. Even more frustrating, a recent study has uncovered brain activity behind the veil of listlessness. But the question remained — how to tease it out?

“They (the VA) are in an excellent position to further advance the science,” Giacino says. He and others believe this will focus additional research on more effective ways of nursing damaged patients back to consciousness, with payoffs beyond the military.

The nearly 70% VA success rate “certainly is above the national norm in the private sector,” says Jonathan Fellus, director of brain injury rehabilitation at Kessler Institute for Rehabilitation in New Jersey.

A review of 11 studies in the private sector showed the highest recovery rate for comatose patients was 54%; in five of those, recovery rates were lower than 10%. Cifu and VA colleagues say they need time to understand the reasons behind their success, and the role of their concentrated focus on physical and communication therapies, drug stimulants and intense monitoring.

“These numbers are higher than we would have expected,” Cifu says, adding that prior efforts showed a rate “significantly less” than where it is now.

“So much has changed since 2006,” says physician Shane Mcnamee, VA director of the polytrauma center in Richmond. “The level of knowledge and approach that you need (to help brain-damaged patients awaken) is not something that you can just unpack out of box.”

They say two key factors helped. Because of the funding emphasis Congress has placed on treating traumatic brain injury during the wars in Iraq and Afghanistan, the VA has more money to spend.

The VA spent $34 million in emerging-consciousness treatment for 104 patients since January 2007, according to department statistics. Total staffing at the four polytrauma centers has expanded from 78 specialists such as doctors and therapists in 2004 to 255 today. And in-patients are allowed more time to wake up.

Private-sector programs rarely pay for special efforts to stir someone out of a coma, often pushing those patients into nursing homes, Giacino says. Those that do fund emerging-consciousness treatment do so for only about 30 days, and only if the patient shows steady improvement, Cifu says.

The VA usually gives these patients up to 90 days to emerge from a vegetative state. Family homes or nursing homes outside the VA are commonly the alternative for those who do not emerge.

The department also makes it easier for relatives to help their loved ones, assisting with moving the patient out of bed, or massaging and stretching limbs, all things vital to recovery. Social workers arrange free travel to and from the VA hospital through charitable donations. Free long-term housing and child care is available.

Cifu cautions that emergence is only a start. Years of painful rehabilitation and the prospect of severe disability lie ahead.

“Some return to relative normalcy in terms of walking and talking,” he says. “Most continue to have some difficulty with normal day-to-day functioning, but have improved to the point where they could return to the community (and), for the most part, to their homes.”

“I want to be independent,” Staff Sgt. Remsburg slowly types on a bedside keyboard in an interview.

Remsburg was on his 10th deployment to war when he was wounded. Special operations soldiers such as Remsburg go to war more often than traditional troops but for shorter periods.

He had led a Ranger squad into combat that night of Oct. 1 on the outskirts of Kandahar, killing nine insurgents. Afterward, as the soldiers walked to where a helicopter would meet them, a roadside bomb detonated, says Col. Brian Mennes, Remsburg’s former battalion commander.

Remsburg was found face down, submerged in a canal filled with water. Bomb fragments had penetrated the right side of his head. Resuscitated but comatose, he began a long recovery that included two surgeries to remove skull sections and allow his damaged brain to swell, according to Mennes and Cory Remsburg’s father, Craig.

In November, Remsburg was transferred from a Navy hospital in Bethesda, Md., here to Tampa, where family members began taking turns at his bedside— Craig switching off with his wife, Anne, or Remsburg’s mother, Karen Petersen, and her husband, Ken. Other family members have filled in as well. A small army of clinicians and therapists, working with members of Remsburg’s family, began the task of helping the young Ranger reach consciousness. Over time, about 20 VA health care workers would treat Remsburg.

Craig Remsburg tracked progress on an online journal — Cory moving his lips, giving a thumbs up, tossing a ball, listening to country music, eating his first full breakfast, writing his name or reaching out from a wheelchair in the parking lot to touch his gray Ford F-150 pickup.

The VA therapists and doctors begin a steady process of pushing and pulling at the physical and mental limits of the patients. Beyond the daily kneading, stretching and exercising of hands, wrists, ankles, legs and arms as the patient lies prone, therapists also move Remsburg in and out of bed. For a time, he was strapped to a tilt table and pulled upright to a position that mimics standing. He is regularly lifted into a wheelchair — sometimes by his father — and wheeled outside into the sun. Splints are applied to wrist and ankle joints to prevent gnarling for lack of use.

During the awakening process, therapists tested Remsburg’s cognitive limits with daily instruction in tasks — asking him to show his teeth, stick out his tongue, blink or close his eyes, or raise his eyebrows. Stimulants such as Ritalin; bromocriptine, used for Parkinson’s disease; or Modafnil, a treatment for narcolepsy, were administered to galvanize the brain.

With each flicker of response, demands ratcheted slightly higher. “They know when to push and when to kind of let up on Cory,” says his mother. “It’s a balance of the drugs, and waiting, and pushing, and waiting. It’s just like: ‘Do a little bit of this and try something different.’ “

“For many years, there was little interest in studying this population because they were viewed as hopeless,” says John Whyte, head of Moss Rehabilitation Research Institute in Philadelphia and a leading researcher in the field.

New advances in imaging of the brain, stimulation drugs and tools to assess meaningful changes have offered promise, he says. The VA results are also a record of how many patients can recover, Whyte and Giacino say. However, they caution, the results need to be analyzed more to learn fully what the VA has accomplished.

For example, they ask, how many of the patients arrived at the VA in a minimally conscious state — a kind of transition between vegetative and fully emerged? How long were patients unconscious before emerging? The longer, the more impressive the result. How many patients might have awakened without the intensive emerging-consciousness program?

The VA plans to publish an analysis of its findings, Cifu says.

But the raw numbers have left VA clinicians with mixed reactions. Some display a heady sense of accomplishment. “If you bring them back alive, we’ve taken care of them,” says physician Steven Scott, head of the polytrauma center here in Tampa.

Others are more cautious. “We still know almost nothing about (the brain) and how it restructures itself and what you can do to support it over time,” says Mcnamee, the VA polytrauma director in Richmond. “We (in this area of science) are in the dark ages of brain injury medicine. We can turn the dials a little bit. … Hopefully it’s enough to kick somebody over the edge. And they start to recover.”

‘Every day, he surprises me’

He followed commands — displaying two, three or four fingers on request or sticking out his tongue — and used objects, trying to brush his hair or his teeth, or throwing a ball, says VA speech therapist Erline Nakano.

Remsburg subsequently began using a treadmill despite significant paralysis on his left side. Suspended from a harness, he is assisted by four therapists — one helping with each leg, a third behind him and a fourth on the treadmill computer.

“Every day, he surprises me with some new movement or ability to do something,” says physical therapist Barbara Darkangelo. “It’s just the way he’s built. … He wants to keep trying.”

In an interview, answering questions on a computer keyboard with his stronger right hand, Remsburg is by turns optimistic and disappointed.

He says he loves the treadmill and is “without a doubt” confident of regaining the body and mind of a Ranger. But progress is agonizingly slow and he still feels “0%” of the man he once was.

He ends on a pensive note: “Never thought I’d be here.”